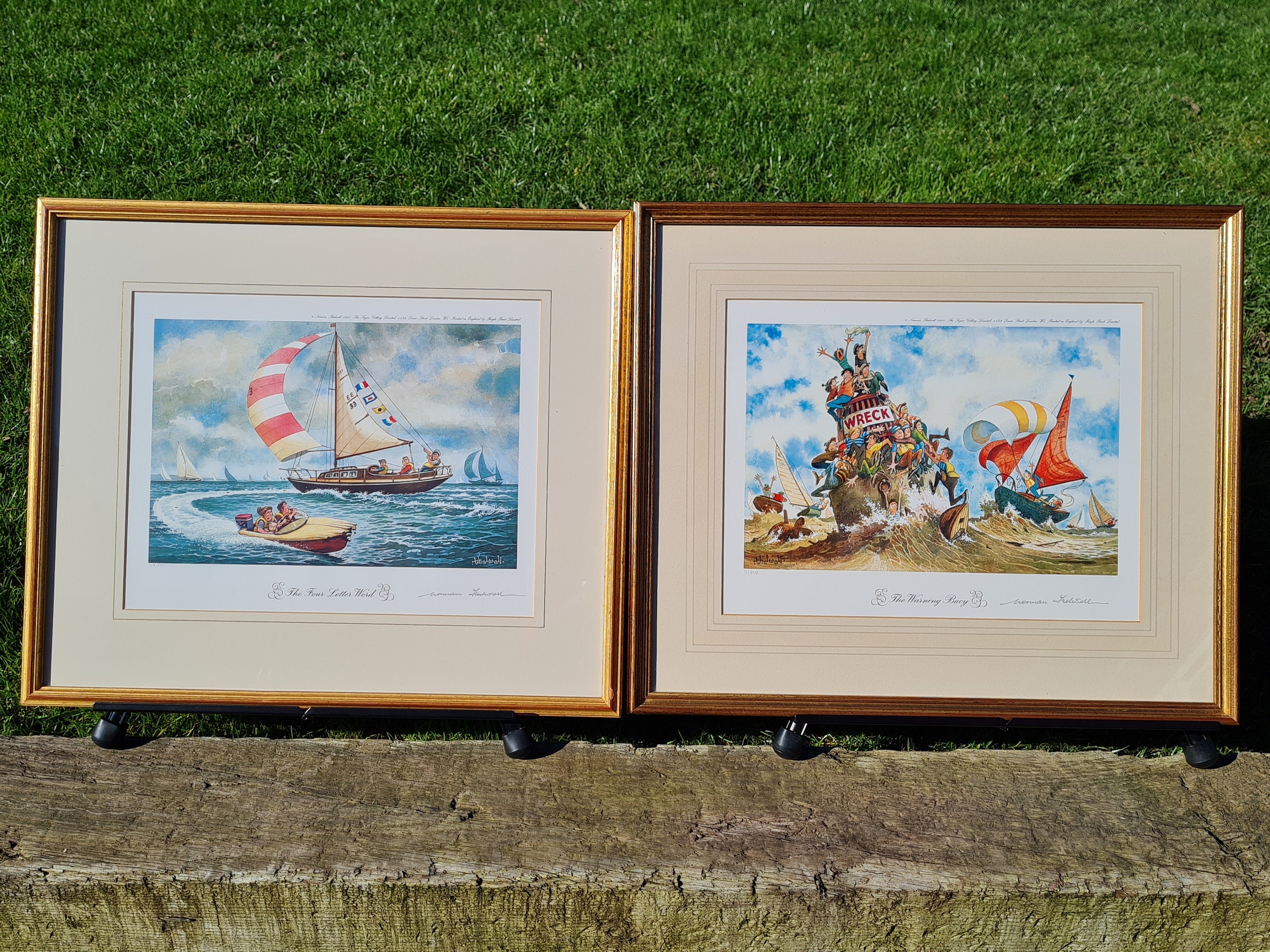 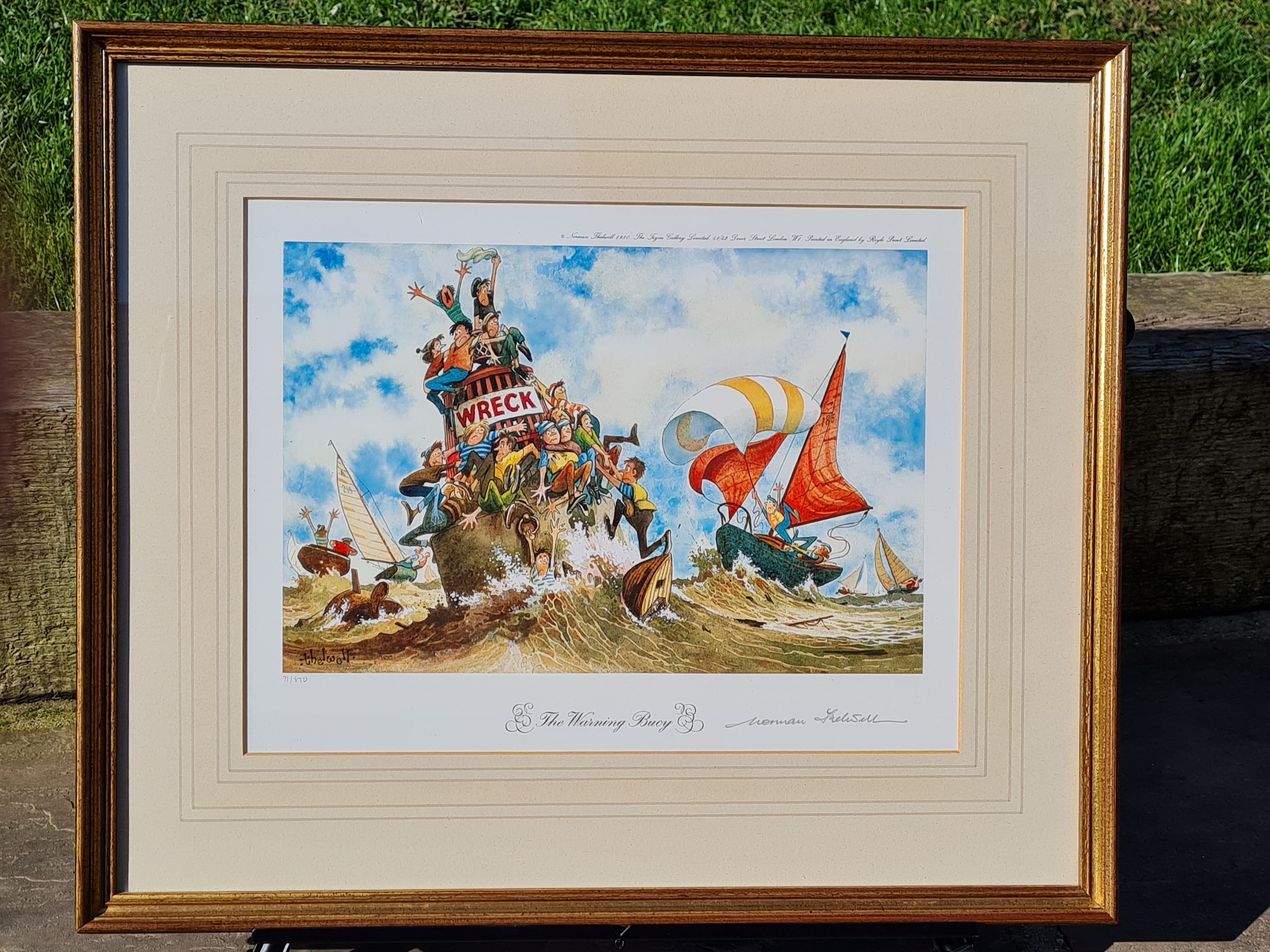 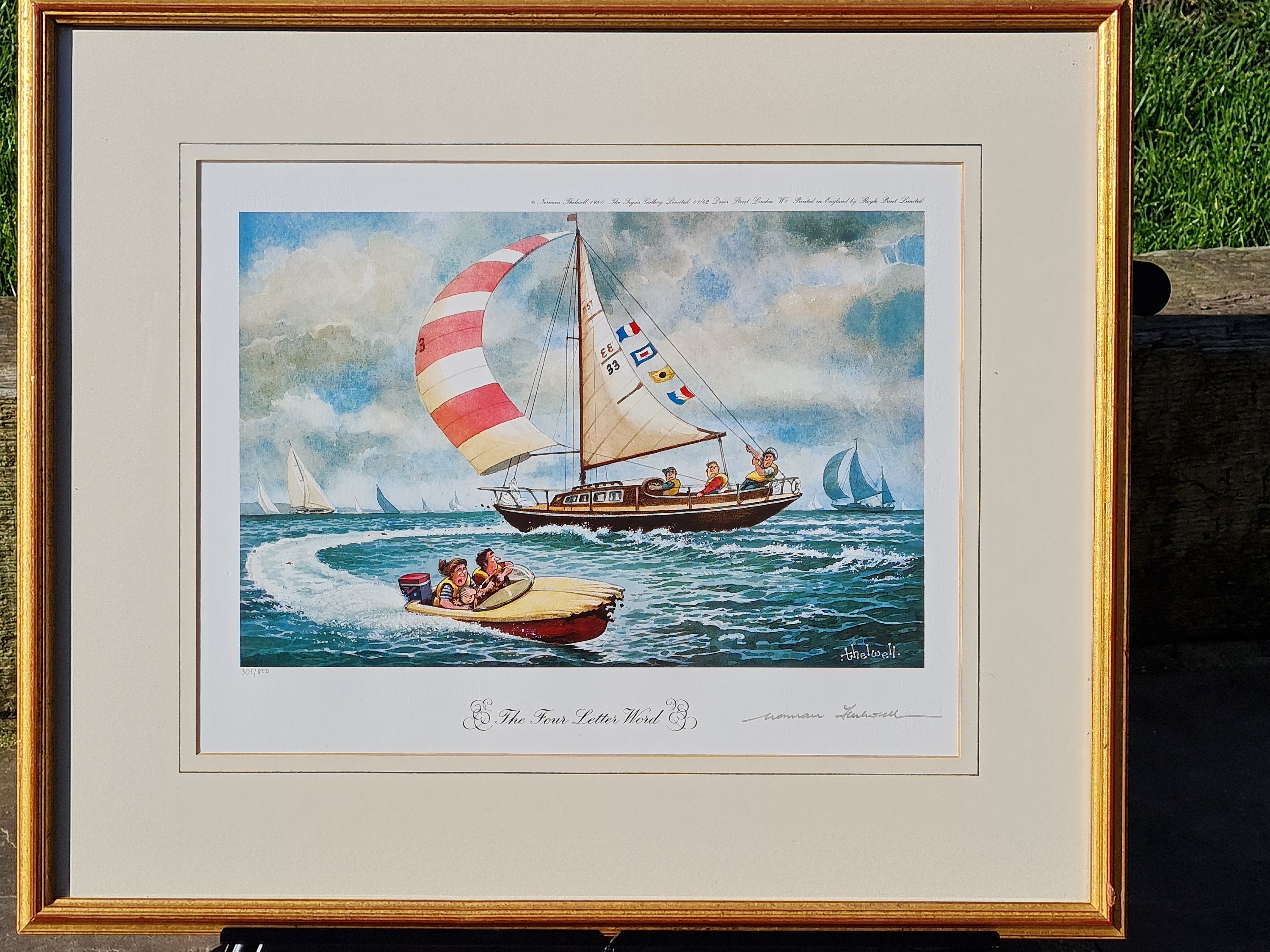 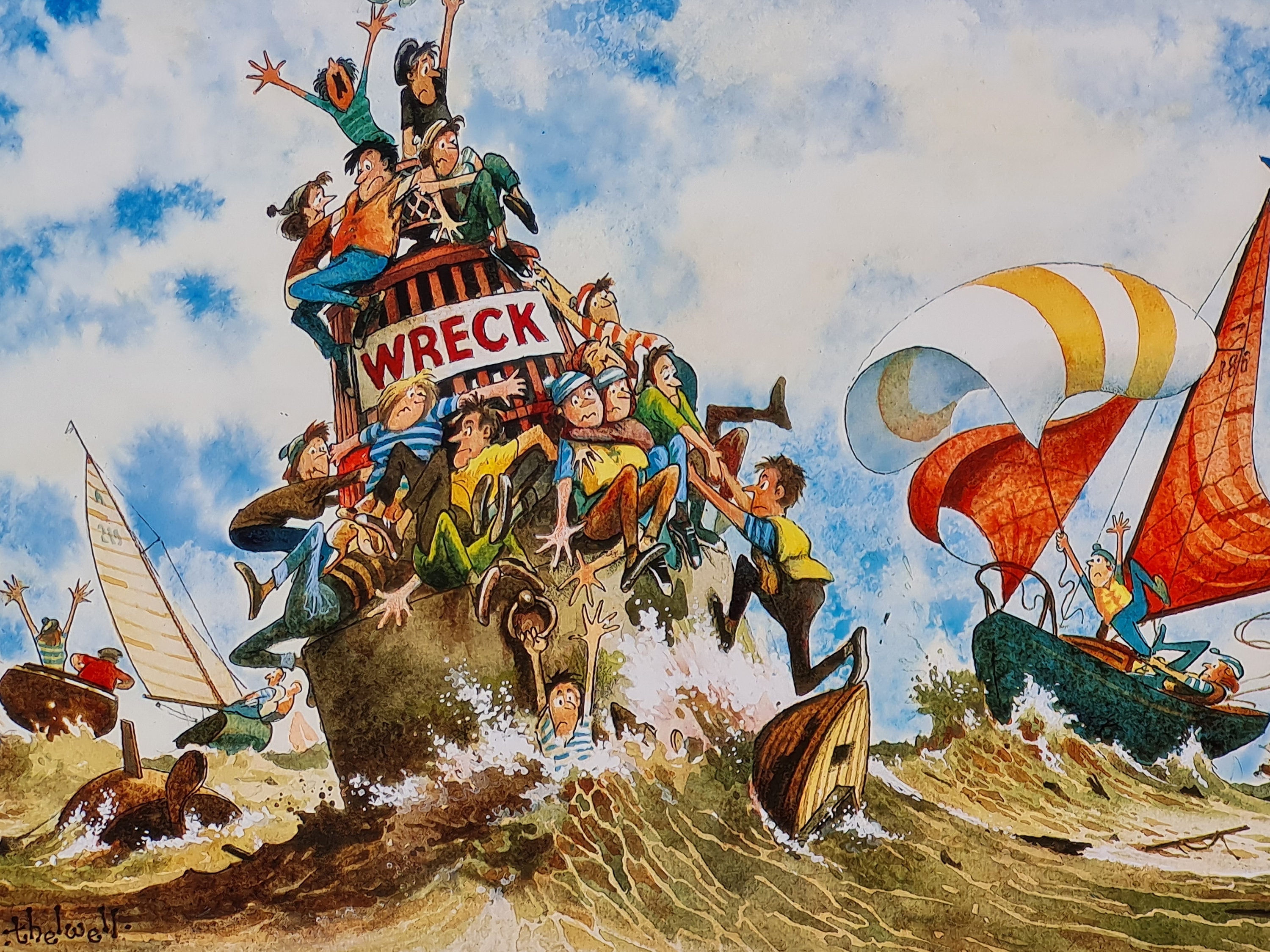 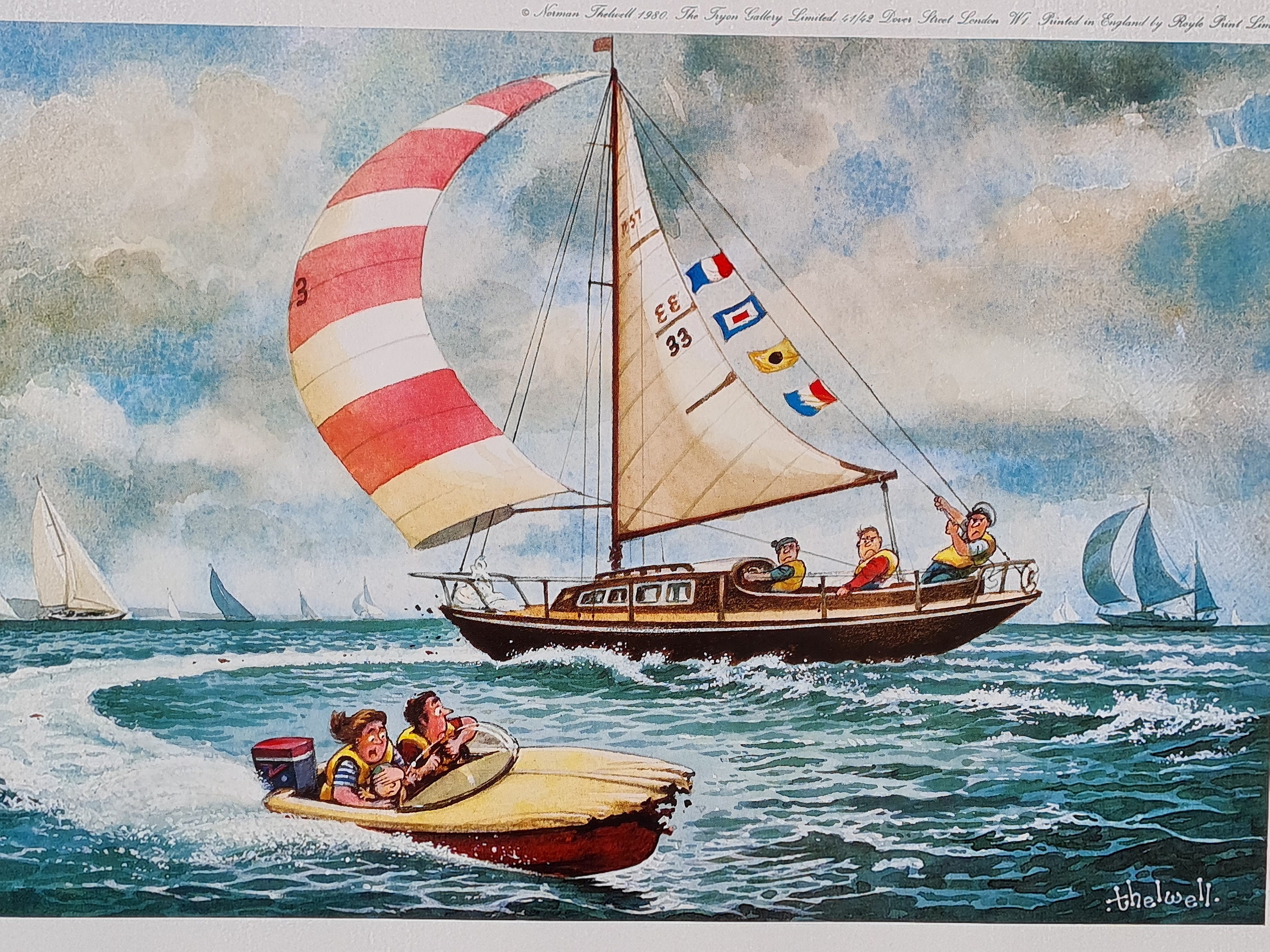 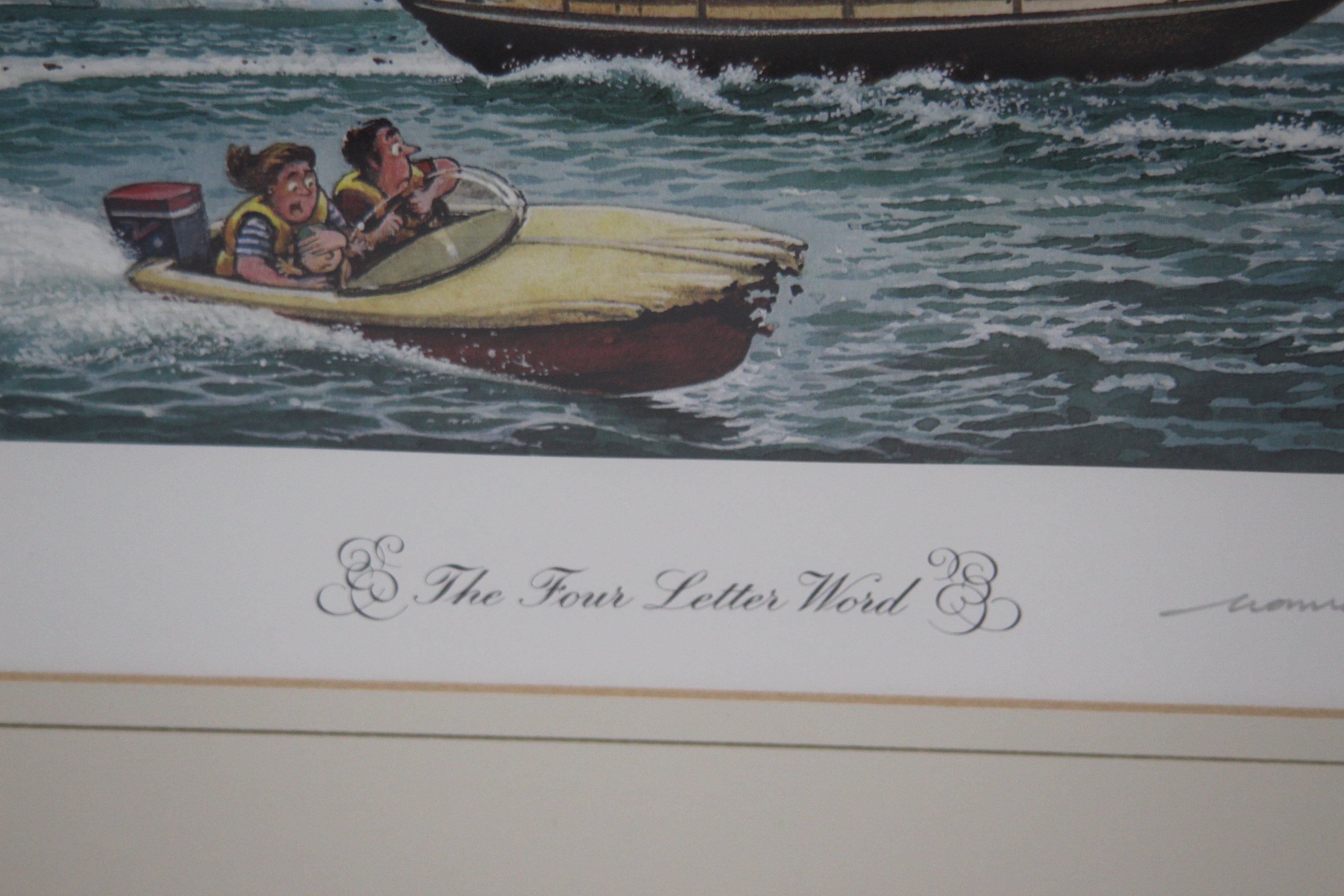 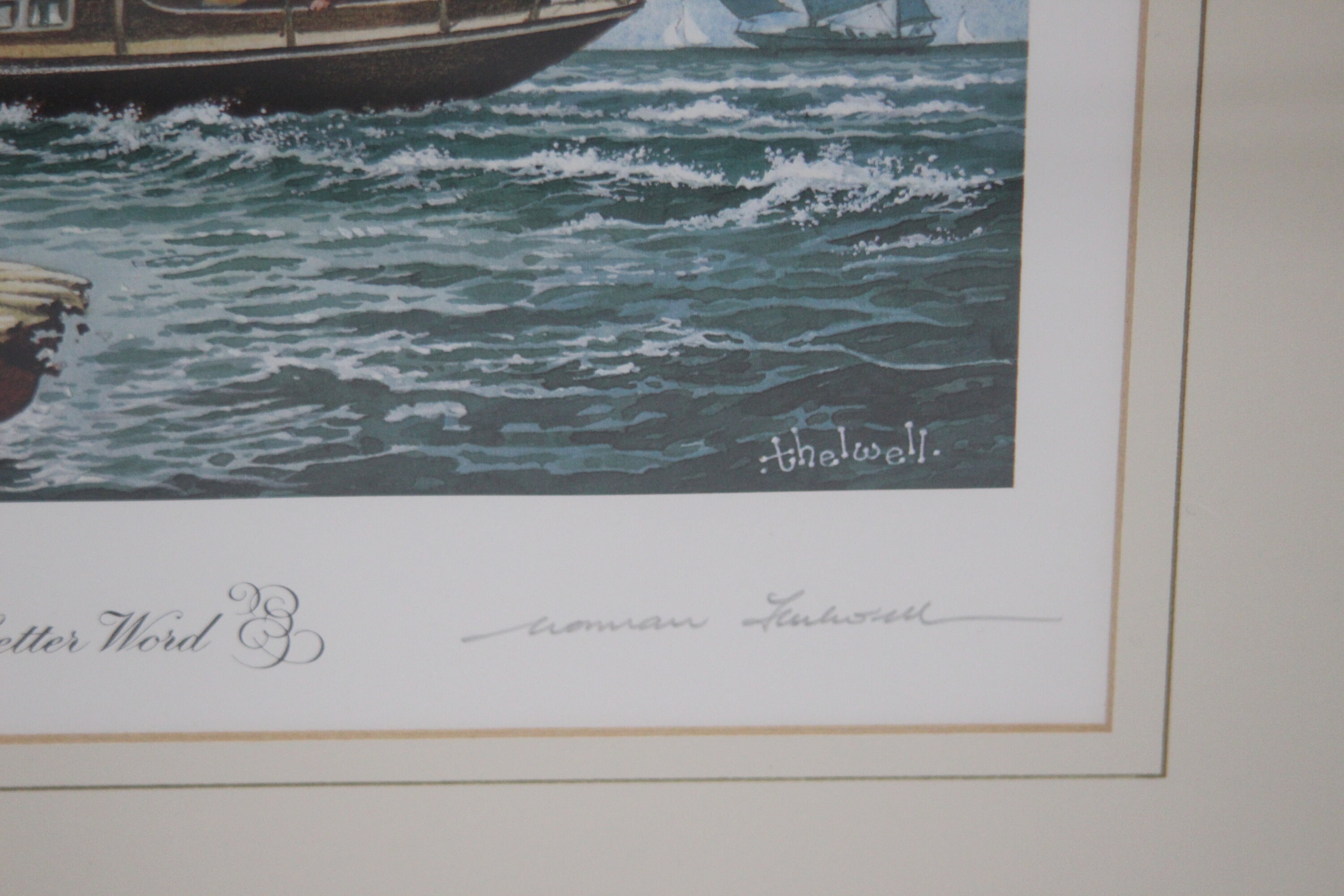 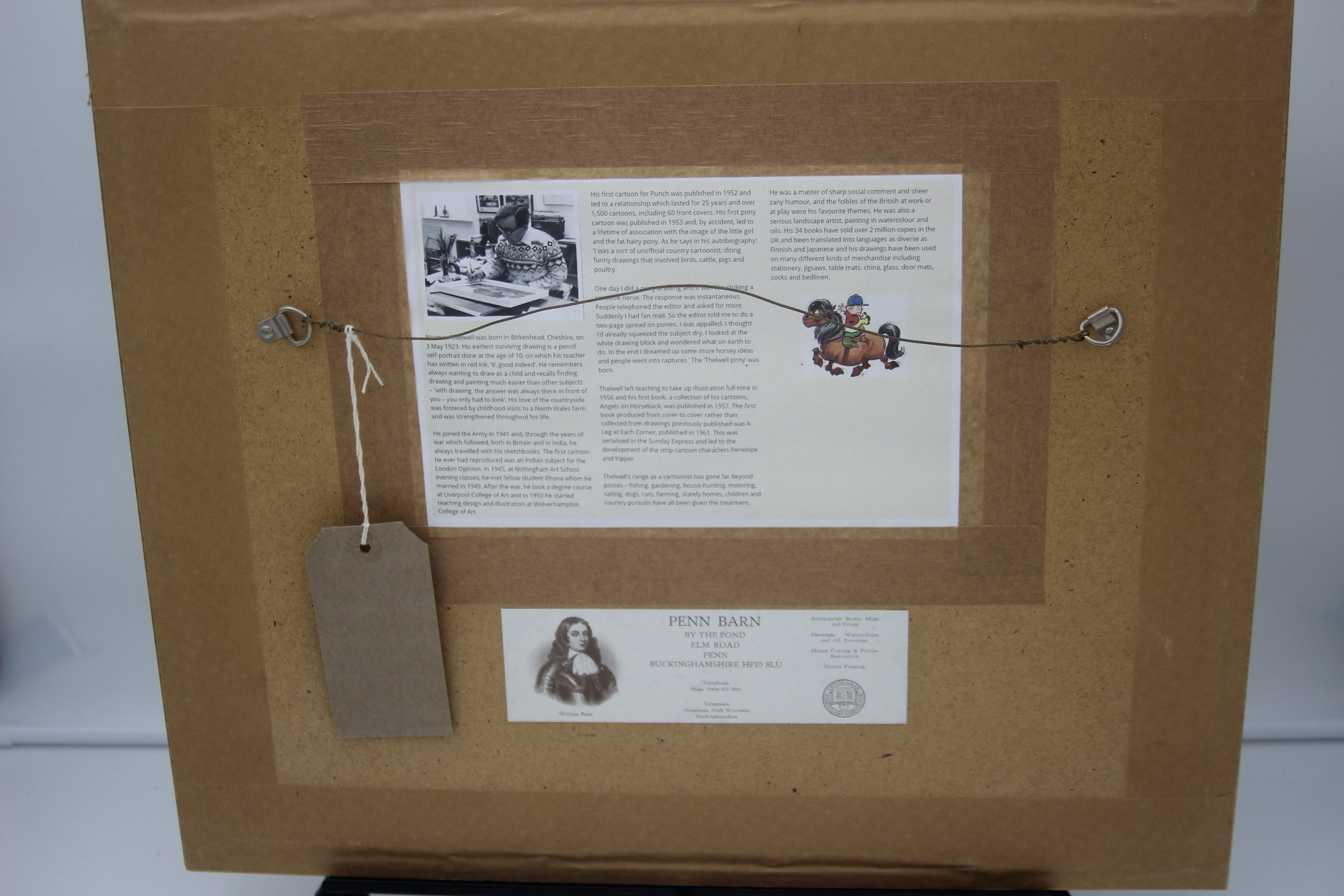 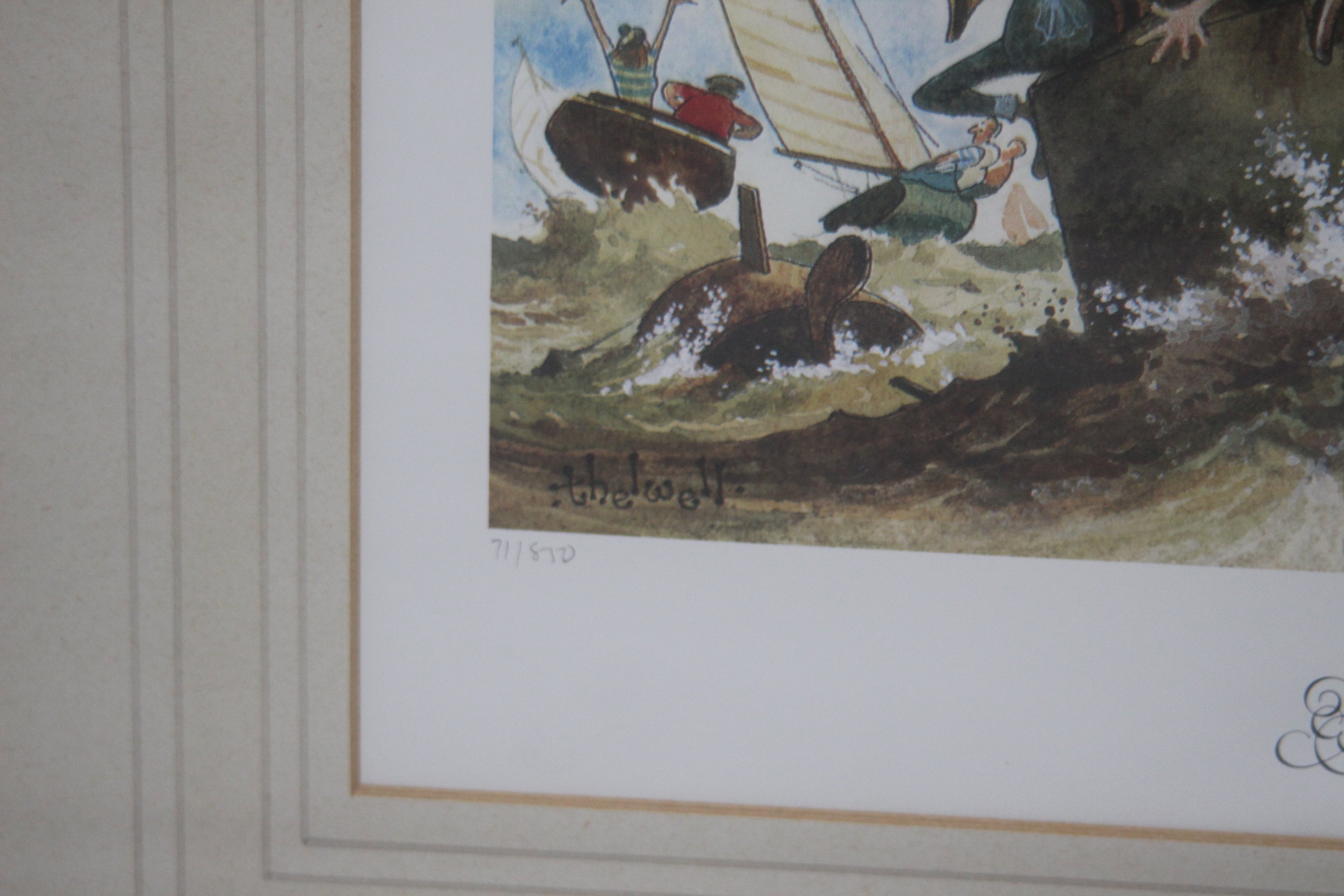 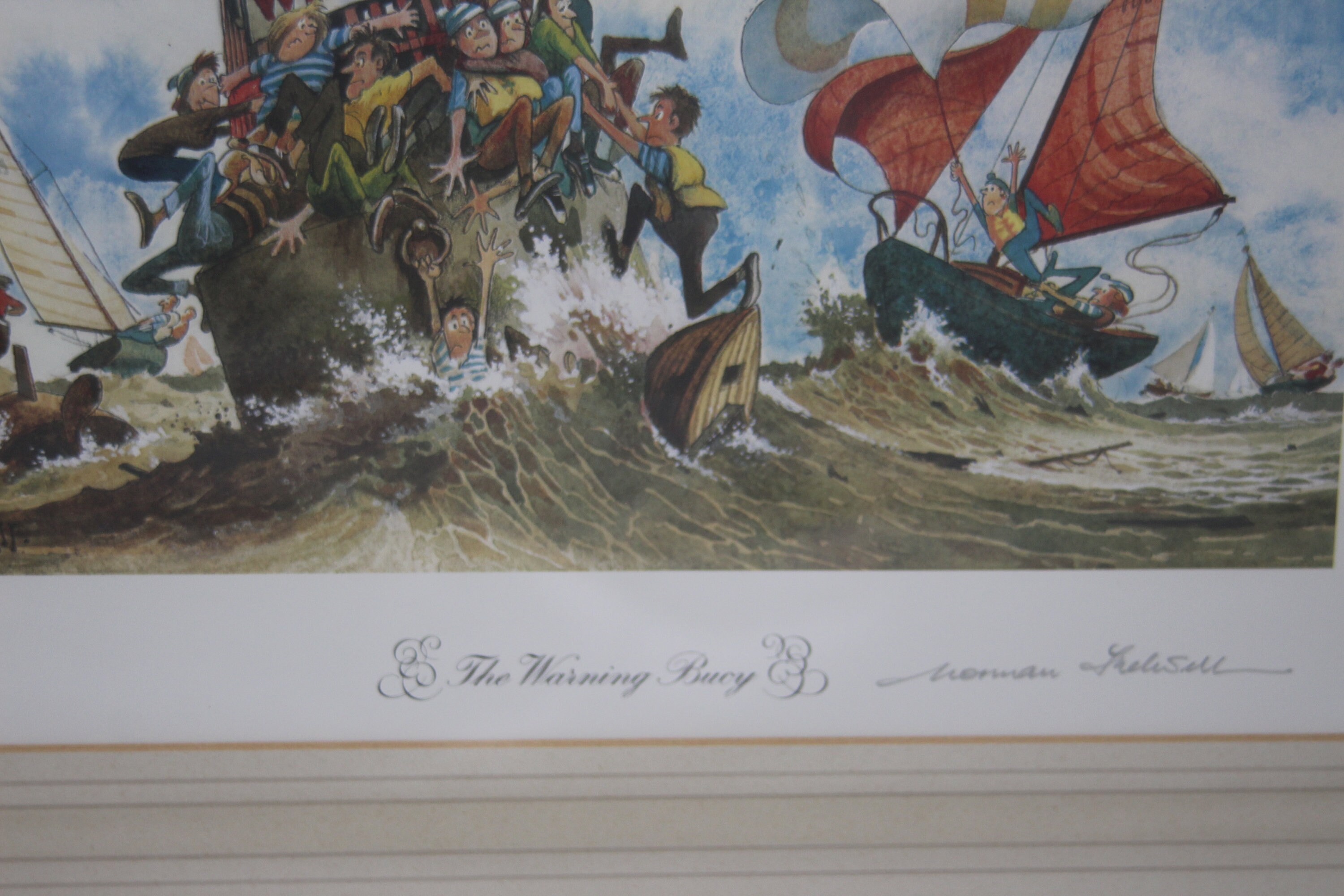 A Pair of Signed Limited Edition Prints of Yachting Scenes by Norman Thelwell. “The Four Letter Word” and “The Warning Bouy”.

A Pair of Signed Limited Edition Prints of Yachting Scenes by Norman Thelwell.

These are very bright and colourful prints in excellent condition. A great gift for anybody into sailing.

Courier price is for UK only but please do get in touch if you would like a quote for international postage.

Norman Thelwell is probably the most popular cartoonist to have worked in Britain since the Second World War. Though almost synonymous with his immortal subject of little girls and their fat ponies, his work is far more wide ranging, perceptive – and indeed prescient – than that association suggests.

Norman Thelwell was born in Tranmere, Birkenhead, Cheshire on 3 May 1923, the younger son of a maintenance engineer at Lever Brothers, Port Sunlight. He was educated locally at Well Lane Primary School and Rock Ferry High School, where he began to show a talent for drawing.

In 1939, Thelwell joined a Liverpool dock office as a junior clerk and, on the outbreak of war, spent nights fire watching. Three years later, he joined the second battalion of the East Yorkshire Regiment, and was soon transferred to the intelligence section because of his ability to draw. During training as a wireless operator in 1944, he took some evening classes at Nottingham School of Art.
Later that year, he was posted to India with the Royal Electrical and Mechanical Engineers, subsequently becoming Art Editor and sole artist for a new army magazine published in New Delhi. While in that position, he had his first cartoon published in London Opinion and a weekly series of caricatures of India service leaders published in News Review.

After the war, Thelwell studied at Liverpool City School of Art (1947-50) and lectured on design and illustration at Wolverhampton College of Art (1950-56). He sold his first drawing to Punch in 1950, and two years later became an important regular contributor. He also worked as a cartoonist for several newspapers (the News Chronicle, the Sunday Dispatch and the Sunday Express) and began to produce his own comic books (beginning with Angels on Horseback – and elsewhere, 1957). Many of these books centre upon country life and county pursuits, and their light-hearted images are founded upon a thorough knowledge of their topics; Thelwell was, for instance, both a fine landscape watercolourist and an enthusiastic angler. However, he surveyed an impressive range of aspects of British life, so providing the public with a constantly entertaining visual indicator of social change.

From 1959, Thelwell and his family lived in Hampshire, first in Braishfield, near Romsey, and then, from 1968, in Timsbury. He also restored a mill near Callington, Cornwall, recounting the experience in A Millstone Round My Neck (1981). He died in Winchester on 7 February 2004.